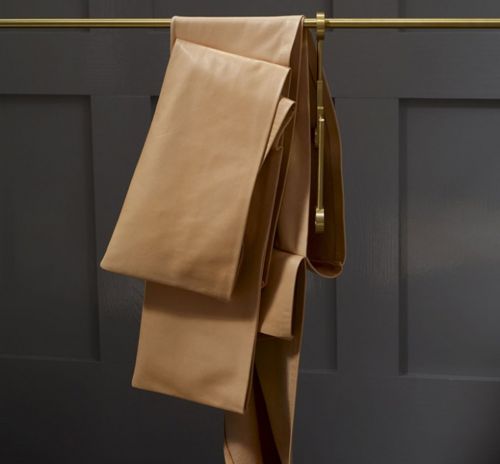 Stephen Friedman Gallery is delighted to announce an exhibition of new work by British artist Claire Barclay. This is the artist’s second solo exhibition at the gallery, and it coincides with her Bloomberg Commission ‘Shadow Spans’ at the Whitechapel Gallery through 2 May 2011.

Barclay is one of her generation’s foremost sculptors. Her practice explores formal and conceptual concerns through both large and smaller scale installations. Turned wood, rawhide, soft leather, machined brass and woven straw are some of the materials that coalesce as the precious and the everyday, the hand-woven and the mechanically produced, are brought to the fore. Familiar forms are hinted at in these careful assemblages. Each sculpted piece teeters somewhere on the brink between the figurative and the abstract, between the ambiguous and the referential.

For her newest body of work, Barclay responds to both the fabric of the gallery, and its location in the heart of the world-renowned tailoring district of Savile Row.  Though previously more known for her larger-scale work, for her show here, Barclay has made a group of smaller and more intimate sculptural forms.  Hand-printed fabrics draped in the front gallery and hung behind the window beckon the viewer to enter. They also reference the uncut cloths readily found in the workshops of the surrounding tailors and fashion houses. Amongst these fabrics, portions of the gallery’s parquet flooring appear to expand and multiply, rising up from the floor in organic formations. These replica parquet blocks, handmade by the artist, form impromptu plinths for small, domestic-sized objects of leather and metal. Barclay’s physical and almost performative response to the gallery’s spaces reveals the subtle, transformative power yielded by the artist’s hand.

Machine metal and sewn fabric ‘toy-like’ sculptures, somewhat reminiscent of small dolls, expand on Barclay’s interest in the tension that lies between the known and the unknown. Partly disguised in a delicate, thin foil wrapping and hand-printed with a selection of geometric designs, the pieces recall packaged sweets or chocolate Easter bunnies.  As the foil is torn away from these moulded forms, so too is the resemblance to the known object.  In this transition from the wrapped to the unwrapped, one thing is revealed, whilst another is lost.  Barclay’s sculptures capture a moment within this process, as the foil sheath bestows a sensuous fragility that neither fully covers nor wholly reveals the being underneath.

Each component of Barclay’s work has been carefully and purposefully made, either by or for the artist. It is in this process of making, of endeavouring to fully understand the properties of any given material, that the meaning is developed. The end results of this practical endeavour to ‘work through’ are uniquely beautiful sculptural forms, which deny categorisation. Neither functional nor figurative, they initiate a cascade of inferences, suggestions, emotions and ideas in the mind of the viewer.