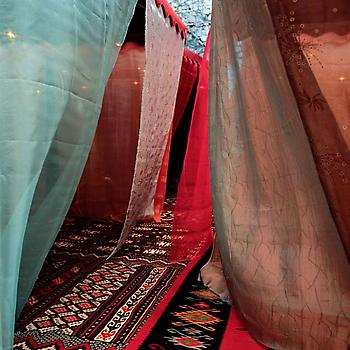 Burden continues his interest in built structures and the role they play in reflecting cultures. In
three individual but interrelated works, he turns his attention to the beauty and metaphorical
possibilities of the architectural folly.

At one end of the gallery Burden has recreated Nomadic Folly (2001). First presented at the
Istanbul Biennial in 2001, this installation is his fantasy of a cultivated nomad’s tent. The structure
is comprised of a large wooden deck made of Turkish cypress and four huge umbrellas. Visitors
can relax and linger in this tent-like structure, replete with opulent handmade carpets, braided
ropes, hanging glass and metal lamps, and rich, sensuous wedding fabrics embroidered with
sparkling threads and traditional patterns. Soothing, seductive Turkish-Armenian music spills
from the tent’s interior. At the other end of the gallery is Dreamer’s Folly (2010), a series of three
highly ornamental cast-iron gazebos reminiscent of those common to traditional English gardens.
The three gazebos have been reconfigured to form one structure. Lacy “Tree of Life” fabrics are
draped around the exterior to complete a beautiful sanctuary in which to dream.

But the calm and beauty of this environment is violently disrupted by the video projection The
Rant (2006), where Burden’s goggled face appears in close-up and many times larger than life,
hovering just above water. In this performance he is a ranting xenophobic preacher delivering a
short, intense message in French (with Italian subtitles), an impassion rejection of the Other.

Like all of Burden’s exhibitions, The Heart: Open or Closed resonates with ambiguity on many
levels. This disarmingly beautiful installation may be his most tender and humanistic to date,
pointing to the beauty in the heart of two different cultures and the hate that can divide them.

Chris Burden was born in Boston, Massachusetts in 1946. He received his BFA from Pomona
College in Claremont, California and his MFA from the University of California at Irvine. Burden’s
solo exhibitions include “14 Magnolia Doubles” at the South London Gallery (London, 2006); “Chris
Burden” at the Baltic Center of Contemporary Art (Gateshead, 2002); “Tower of Power” at the
Museum Moderner Kunst Stiftung Ludwig (Vienna, 2002); “When Robots Rule: The Two Minute
Airplane Factory” at the Tate Gallery (London, 1999); and “Chris Burden: A Twenty Year Survey”
at the Orange County Museum of Art (Newport Beach, 1988). His permanent outdoor installation
at the Los Angeles County Museum of Art (LACMA) entitled Urban Light was unveiled in 2008,
comprising of 202 restored antiques streetlights. Later the same year, What My Dad Gave Me, a
65-foot skyscraper made entirely of Erector Set parts was installed at Rockefeller Center in New
York City. His work is featured in prominent museum collections such as the LACMA and the
Museum of Contemporary Art, Los Angeles; the Whitney Museum of Modern Art and the Museum
of Modern Art, New York; the Tate Gallery, London; the Middelheim Museum, Antwerp, Belgium;
the Inhotim Centro de Arte Contemporanea, Brazil; the 21st Century Museum of Contemporary Art,
Kanazawa, Japan; the Museum of Contemporary Art, Chicago, among others. Burden currently
lives and works in Topanga, California.

10 thoughts on “CHRIS BURDEN: The Heart: Open or Closed”