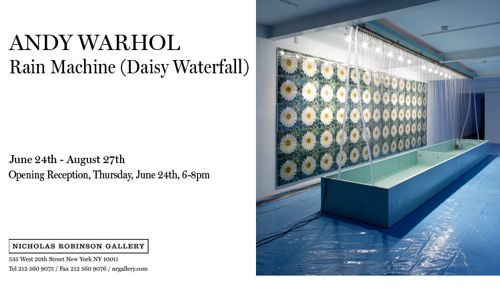 In Los Angeles in February 1969, Andy Warhol met with Maurice Tuchman and modern art curators at Los Angeles County Museum of Art to visit several Los Angeles companies, with the intention of collaborating on the seminal Art and Technology project initiated by the Museum.

By June 1969, Andy Warhol was connected with Cowles Communications in New York and contracted with LACMA to create work for A&T, specifically to be exhibited at EXPO 70 in Osaka, and then a year later at LACMA.

In August 1969, Warhol decided to utilize a flower image and repeat it serially with the lenticular photographic process, called ‘Xography’ by Cowles Communications. It was decided to construct the work in New York and transport it to Osaka and Los Angeles. At a meeting in New York in November 1969, Warhol met with the fabricator of the rain machine and Maurice Tuchman. The artist decided to have five disparate panels, each 4X8 feet, to be placed at time of installation. He also wanted two parallel layers of water rather than a single screen. In this meeting Warhol also decided to simply display the rain producing mechanism forthrightly in all its crudeness, rather than having it encased in an aesthetically sophisticated way.

One problem with the installation at Osaka was that the illusion of depth conveyed by the images carried only about ten feet. For the exhibition at LACMA the following year it was determined to have each image depict not four but one greatly enlarged daisy, and technical improvements were to allow the 3-D illusion to project a much further distance. At the conclusion of EXPO 70 it was agreed to destroy the 3-D panels, which had been water damaged during the six-month run of the show, and the rain machine was discarded as well. The same fate was to await the prolonged exhibition of the Rain Machine at LACMA in 1971: after five months of unprotected continuous exposure to water the daisy panels were damaged and were destroyed at the end of the show. A decision to discard the rain machine was also made.

In due course the Andy Warhol Rain Machine in the permanent collection of the Warhol Museum was to be covered in Plexiglas. The 70 panels that comprise the Rain Machine on view here were encased for the exhibitions at Cologne and New York in 2002. For these presentations the rain machine was fabricated according to the earlier plans and wishes of Warhol as they are manifest in the installation at the Andy Warhol Museum.