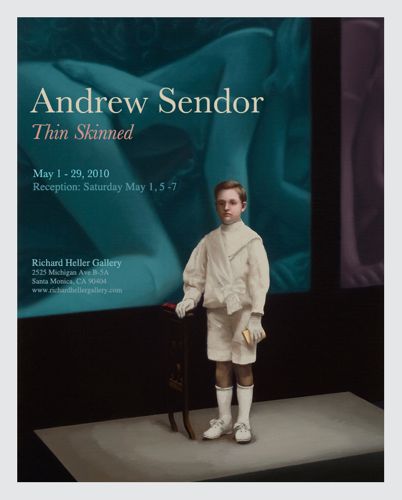 Richard Heller Gallery is pleased to present Thin Skinned, Andrew Sendor’s first exhibition with the
gallery, and his solo debut on the west coast of the United States. For the past six years, Sendor has been
deeply involved with a painting practice that investigates both the potential and the limitations of
representational painting. While Sendor’s paintings have evolved both materially and conceptually, the
motivation behind the work has always been characterized by a profound fascination in how ideas and
images are mediated through the language of painting.
This recent body of work, which Sendor created in Madrid, Spain, where he currently lives, is a
progression of uncanny hypothetical situations presented in the form of intimately sized, highly skilled oil
paintings. Sendor intelligently navigates his way through a web of delicate topics, such as the tenuous
boundaries between the sacred and the profane, between religious faith and philosophical inquiry, all
within a pictorial space that is clearly his own.
Thin Skinned features paintings that portray videos, photographs, paintings, sculptures, and, absurdly,
human-beings-as-art within the walls of museum and gallery spaces. This unexpected contextualization of
the figure, mysteriously frozen in a taxidermy form on pedestals, at once adopts a monumental status and
undermines accepted notions about what Art is, or what Art can be. While the depicted characters are
ostensibly functioning as the subjects, it is the setting in which they are found, in and amongst
appropriated artworks, that generates the questions embedded in Sendor’s ambitious painting project.
Exploring the role of the painter becomes a multifaceted endeavor for Sendor as he straddles the
vernaculars of historical genres and contemporaneous methodologies in painting, from nineteenth-century
portraiture to photorealism. As Jasper Sharp eloquently states, “Sendor does not set out with the express
intent to revise painting. Rather, with an educated consciousness of the work of his predecessors and the
debates that have swirled around contemporary art in recent years, he formulates his own visual language
and with it a distinctly personal sensibility.”