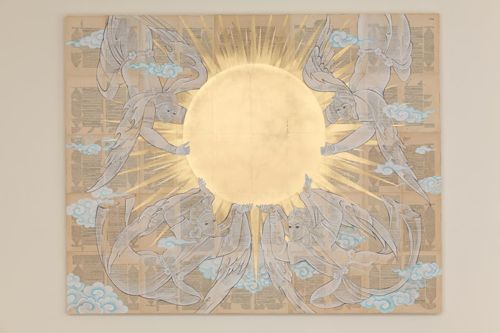 Through a steady and impressive career that has incorporated sculpture, photography, fashion, and installation, Ala Ebtekar has continually returned to his initial passion of drawing and painting. With meticulous deliberation to conceptual intent and aesthetic execution, he creates fluid, graceful pieces that inhabit a realm where past and present / east and west collide in a dance of time and space.

Well known for his series of intricate paintings on pages of religious manuscripts, in which he situates scenes of epic battles of warriors donning helmeted armor, wielding medieval swords and modern day bandoliers, Ebtekar has created a hybrid world that references both past and present in a seamless fusion of mythologies and time. In recent solo exhibitions at The Third Line Gallery in Dubai in Fall 2009 and Gallery Paule Anglim in San Francisco in 2010, he created a series of multimedia works of women in resilient poses emanating strength, resolve, and determination, simultaneously hinting at ancient Persian epics and the most recent call for social justice by Iran’s youth – a movement led quite visibly by young Iranian women. He brought to the

forefront an often overlooked chapter of history and field of scholarship about the role women warriors had in ancient Persia – dating back at least 2,000 years to the time of the Parthians – while simultaneously honoring and highlighting the role Iranian women play today in the creation of history.

In his upcoming exhibition @ CJG, Ebtekar will bring all threads of his practice together, showing his epic paintings and drawings on mounted prayer book pages, his series involving re-mythologized Persian women, and a newly constructed installation piece(s).

A talented draughtsman since childhood, the artist studied traditional painting technique in Iran, and was an active collaborator in Tim Rollins’ K.O.S.(Kids of Survival) before attending the San Francisco Art Institute (BFA) and Stanford University (MFA.) Ebtekar has exhibited in Los Angeles, London and Dubai, and was chosen for the 2006 California Biennial. His installation “Elemental” travelled in the acclaimed exhibition “One Way or Another: Asian American Art Now” organized by the Asia Society.