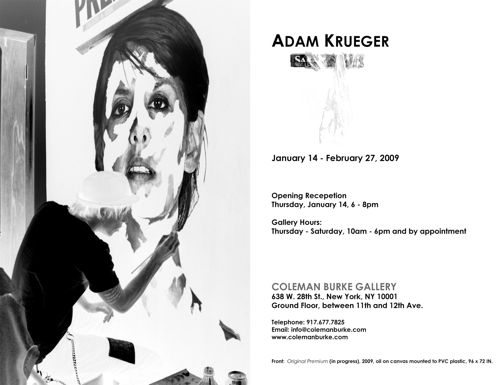 For the exhibition, Untitled (saran wrap painting), 2009, the artist has created twenty-six new works which
will be installed in varying manners throughout the gallery.  Each painting is initially rendered on a
stretched canvas and subsequently cut out and adhered to a thin sheet of PVC plastic.  In many cases,
such as in Fly in Ointment, 2008, Krueger then installs the work directly on the gallery wall, creating a
dynamic trompe l’oeil effect in which the image appears more autonomous than it would were it
confined to a traditional stretched canvas.  Three additional works are comprised of figurative paintings
mounted to free-standing plywood silhouettes, installed in accessible locations around the gallery which
invite visitors to pose with each work while assuming the identity of the painted subject.

Krueger’s innovative installation methods and virtuosic technical ability can often obscure the highly
personal and emotional subject matter that pervade his work.  In each painting and installation the artist
depicts a complex autobiographical moment or feeling, though does so self-consciously via the female
form.  In Small Wonder, 2009, a woman with a shaved head breast feeds a packaged loaf of Wonder
Bread, symbolizing a fear of being able to provide adequate sustenance to oneself and one’s family, a
problem that has become familiar to people in every industry during the current economic recession but
one that has always characterized the life of the artist.

Krueger intentionally distances himself from each work so as not to distract the viewer from the universal
nature of the subjects, but also partly to maintain a degree of emotional anonymity in an increasingly-
ostentatious world.  This reticence of the spotlight is idiosyncratic in a generation responsible for coining
the term “Art Star” and inventing Facebook, Twitter and the “blogosphere”.  But although Krueger
withholds any direct visual reference to himself, the genuine nature of the subjects he so laboriously
portrays could not exist without intense moments of introspection.

Born in 1982, Krueger received his B.A from the Rhode Island School of Design and his M.F.A from the
School of Visual Arts, New York, NY.  He has shown in group exhibitions at the David Zwirner Gallery,
Marlborough Chelsea and most recently in The Open at Deitch Studios, Long Island City, NY.  The artist
lives and works on the Lower East Side.